Maria Rosa Sossai on «To Trample Down an Arable Land»

Victor Alimpiev’s video installation To Trample Down an Arable Land, 2009, stages the silent advance, in single file, of a group of dancers up a slightly tilted ramp. Co-ordinated with each other like some cellular organism, their slow and repeated gestures are reminiscent of theatre rehearsals when the actors diligently follow the indications of the producer. Some of the protagonists hold flags which at times cover the bodies with a visual effect similar to some baroque capriccio. Differently from earlier videos in which voices were heard singing, here the only sounds are of the footsteps and the banging of the flag poles on the floor. The close-ups of facial details allow the emergence of the harmony of the group and the compactness with which the evocative and allusive individual movements are carried out during the ascent. The act of kneeling of the first line of dancers undoubtedly brings to mind the bowing of the actors at the end of a show, but also the prayerful stance of renaissance paintings of the Madonna. Even the pose of the dancers while resting is reminiscent of the pause of two peasants during work in the fields depicted by Jules-Bastien Lepage in Les Foins, 1877. Even though the pale pink of the flags does not refer to any precise historical period, an association with past ideologies is inevitable, above all with communism, which is by now crushed and subject to the logic of consumerism, and with the red flag which, in the cinema, theatre and painting, is the symbol par excellence of the freedom of people on their march towards revolution. The slightly forward-curving shoulders of the dancers under the weight of their burden repeats the rhythm of a rhyme, or that of a hoe as it digs holes for plants, or the unchanging ritual of priests officiating a mass. The construction of each visual and chromatic element of the choreography is perfectly equidistant from an ideal centre and keeps up a distant dialogue with the images of the second video, in the next room, where we can see various spectators in the last row of the procession who observe the action. This is a second point of view and rounds off the compositional form: it is an ideal line of conjunction. 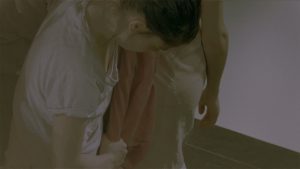