VICTOR ALIMPIEV: «THERE ARE NO QUOTES»

12th of September, 2017 the exhibition “Centimeter: а Color Cut of Darkness, Quantifiable Algae, also Known as Smoke” by Victor Alimpiev was opened at REGINA Gallery. The exhibition has combined picturesque series of works and new binaural video which is the essential showpiece of the exposition, artist explains the details in the following interview.

Tell us what is the meaning of the dance showed by girls in the “Centimeter” video?

All of my works are single eyed, there is no any allegoric nature in it. There is a dance that tells a story and there is just a dance. Simply a dance is the dance that has some function to seduce, for example, or dance better than anyone else. I mean there is no general sense, the dance is the sense itself in its skillfulness, suggestibility. Same sense the playing music has. It would be interesting for me if this work was conceived as musical first of all. If the whole performance is considered as a concert, we can imagine that the girls are creating some kind of percussion music, not dancing.

What inspired you to create this kind of work?

The basic was a kind of routine idea to create two choreographic groups – the first one conducting, the second – orchestral. However the character of the action was supposed to be the same. I mean, if in music the conductor guides the sounds and the orchestra emits sounds, the both cases here are choreography. We instinctively understand which group is leading at the moment. Later on during rehearsals and staging I remembered one of my strongest choreographic impression, and that impression was not from a person. Zingaro circus (French horse theatre, editor’s note) often comes to Moscow, I’ve visited one of the show and its final totally struck my imagination. Complete darkness, there is a horse in the middle of manege, the hoss with forceful legs, faint light drops upon it. The hoss is standing and striking out his legs, trampling down the sand of manege, making not loud, dense sound similar to drumming… That’s all. There is some kind of high note in it. Notably the only one. When our rehearsals were coming to the end came up with the word “herd” –  it means the girls on video are like horses, kind of wayward, there is flavour of feminism in it, some kind of power and horizontal dominion, the same as inside an orchestra.

Are you the choreographer in your video works?

While composing such work, you thinking over the main moments – postures, positions, principals and so on. For example, there is a very circumspect administrative system шт the video “Centimeter” – the front girl, the one making signals, is controlled by the second girl, the second one is controlled by the third, the third by the fourth. Same as to imagine a conductor who’s conducting the other conductors,the other conducts the third conducter and the last one conducts the orchestra. That is, a certain chain of gears has been formed and settled between the dancers, which makes it possible to create the impression of a merging organism, some autonomy, like a space station. And this base transmits some mission to the second group of girls and they react to the signal. It means that the “tap-dance”, showed by the girls, it is modeled so that the brighter is the signal, the longer are the stops, the voids in the movement.

Do you always cast the actors for your videos yourself?

Yes. It is often rather a long process. We make unique choreographic text with each dancer and it depends on individual aspects of the girl. Accordingly, the text of each dancer is studied by all, since it is possible to create the effect of sequential control by repeating the same movements with a time delay, but with some changes, with some own variations, adding something out of the girl’s own text – when she is in the front edge it. In general, the whole thing is our production, there are no quotes.

How long did it take from just an idea to its full materialization?

More than a year. Montage took approximately 10 months. By the way that work required very long rehearsals. The shooting lasted for a day, but we were perfectly prepared for it. The principle of work is that we are preparing the production as a performance. We do not shoot by parts (it happens very rarely), we are acting the performance from the beginning to the very end. The video shoot day is not the hardest one. Moreover, I always count on the fact that on a shooting day there will be a qualitative leap of the game among the artists at rehearsals, accompanied by a wave of freedom and concentration. During the video editing process, I encountered a lot of difficulties: making the harmonious score of movements and positions in the frame was not easy, because the frame was vertical, and it’s incredibly difficult to fit a vertical person into a vertical frame. Another interesting point in the video is the sound. Because I always make an artificial sound, if it’s not a question of speech. For example, the sound of tapping is made with a very sensitive microphone, fingers and a book. There is such a paradox that it is the artificial sound in the frame that creates the effect of reality: small discrepancies in sound and images, as well as timbre inconsistencies, make one pay attention, building up the missing links and the event as a whole acquires the features of what is happening here and now. There is an anechoic room for radio waves testing on the territory of the Research Institute of Long-Distance Radio Communication, reminiscent of the womb of a wrecked spacecraft. There we recorded all the sounds. 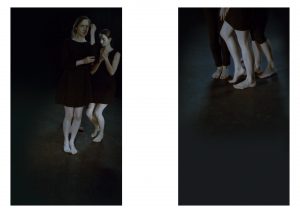